Everything You Need To Know About Static Application Security Testing (SAST)

Every developer wants to keep their source code secure without having to think about it too much. Developers frequently lack the security background necessary to recognize unsafe coding practices and understand how to use safe APIs. Static Application Security Testing (SAST), which is a component of your total application security, enters the picture in this situation. SAST makes it possible for you to examine your source code for security flaws without having to do it yourself. This article highlight all about SAST, its functionality, usage and also the many advantages and tools used for the same. 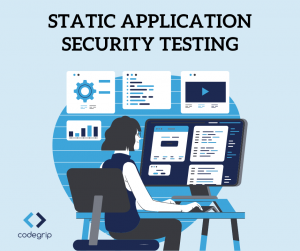 Static analysis, often known as static application security testing (SAST), is a testing approach that examines source code to discover security flaws that render the apps used by your company vulnerable to attack. Before the code is compiled, an application is scanned by SAST. White box testing is another name for it. By giving quick feedback to developers on problems introduced into code during development, SAST lowers security risks in programs.

With real-time access to suggestions and line-of-code navigation, it assists developers in learning about security as they work, facilitating quicker vulnerability detection and collaborative auditing. This makes it possible for programmers to write more secure code, which results in a more secure application.

SAST happens relatively early in the Software Development Life Cycle (SDLC) since it may be done without a functioning application and does not involve running any code. It enables developers to swiftly address problems without halting builds or introducing vulnerabilities into the application’s final release.

Vulnerabilities can be found early in the development process. SAST tools provide developers with immediate feedback while they code, assisting them in resolving problems before moving on to the next stage of the SDLC. By doing this, security-related concerns are not treated as an afterthought. Additionally, SAST tools offer graphical depictions of the faults discovered, from source to sink. These make it simpler to navigate the code.

Recommended Read: What is Code Vulnerability?

Some technologies show the dangerous code and pinpoint the precise position of vulnerabilities. Without requiring in-depth knowledge of the security domain, tools can also offer detailed advice on how to address problems and the appropriate place in the code to fix them. With SAST tools, developers can also produce the customized reports they require; these reports can be exported offline and monitored using dashboards.

It can be beneficial for developers to keep track of all security concerns highlighted by the tool in order to quickly fix them and release programs with few issues. This procedure aids in the development of a secure SDLC. It is crucial to remember that SAST tools are frequently used on the application, for example, during daily or monthly builds, whenever code is checked in, or during a code release. All information relating to SAST tools can be understood in the following part of this article.

Why Do You Need Static Application Security Testing In Your Project?

Developers do not have to worry about adhering to best practices consistently because SAST technologies can identify security issues early in the development process, especially in contexts where there are strict deadlines. Security personnel is vastly outnumbered by developers.

Finding the resources to conduct code reviews on even a small portion of an organization’s apps can be difficult. The capability of SAST tools to examine the entire codebase is one of its main advantages. They are also significantly quicker than human-performed manual secure code reviews.

In a couple of minutes, these technologies can scan millions of lines of code. With high confidence, SAST tools automatically detect significant vulnerabilities, including buffer overflows, SQL injection, cross-site scripting, and others. Therefore, using static analysis in the SDLC can significantly improve the overall quality of the code produced.

A Static Application Security Testing tool should be used with other security technologies. The best outcome will occur from doing this, and most security vulnerabilities will be fixed. Security should be a priority for every firm from the outset because it is essential in an agile setting. Static application security testing is a crucial security tool that any firm has to have, so we should promote it among the development team and management team.